A Trip to THE DARKNESS of St. Louis... 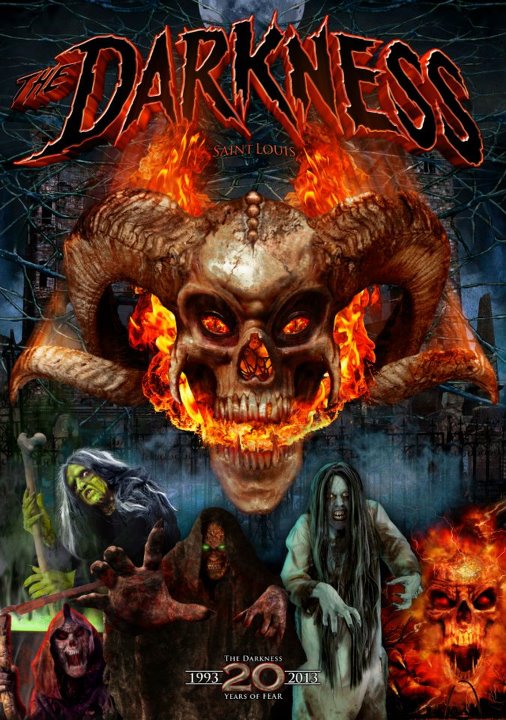 Ah, yes....The Darkness - almost universally acclaimed as one of the best haunted houses in the country...and y'know, something? It's really hard to dispute that claim...

I can count the number of haunts that are even close this one's greatness on one hand - yep, this is one of the Big Ones, folks - a "Must See Before You Die" type experience for the haunt thrill seeker.

The attraction itself is set in an older industrial building, and the owners went to great pains to take out any semblance of the location's interior - as we all know, any suspension of disbelief goes right out the window when a piece of reality creeps in (I'll touch more on that a bit later) but that's not a problem here!

What I loved about it the most was how it combines the traditional and the technological in a ghoulish unification guaranteed to delight even the most blasé haunter...and, yes, I wrote that myself!

In a nutshell, you have a very traditional haunted house, but with an attention to detail that goes above and beyond most haunts - all those little knick-knacks and bits and pieces of fine detailing that add to a scene's believability  - think of it in terms of a living room scene set in your own home and all the tiny items that would be lying on the table, on the floor, etc. That adds a tinge of realism that accents the scares just that bit more.

Throw in a smattering of the latest technological pieces mixed with some really fantastic sets and, well, what else can I add?

Highlights include a great dungeon sequence, complete with something Rather Nasty waiting in a fountain, a dinosaur surprise where you least expect it, and one the most elaborate Mummy's Tombs I've ever seen - I'm an enormous Universal Monsters fan, so, anything even related to characters like Dracula, Frankenstein, the Wolf Man or the Mummy just make the trip so much more worthwhile...take a moment or two to take this one in, it's genuinely breath-taking.

As a whole, The Darkness does not have an overriding theme - there is a loose House of Horrors vibe to it all - but when you reach this level of flow and sophistication, you just kick back and enjoy the ride...

Be ready with your cameras, too, as you wait your turn in line - even here, there are props, set pieces and surprises galore - I was genuinely awed by the level they went to just for the entry gate - fantastic stuff!

Also worthy of note is a 3-D clown segment to the attraction called Terror Visions - and while the clown thing never really appealed to me, this is one of the best you will find, a wonderful blend of ultraviolet and 3-D effects, very well done.

Another nifty twist to The Darkness is that it's creators understand the element of surprise better than most - things have this habit of just jumping out at you, sneaking up behind you and popping up in the last place you would expect...my advice is to put the jumpiest person in your group in the front and watch the fun...granted, they may never speak to you again, but, hey, that's the breaks...they'll get over it...

There's a gift shop at the end - dubbed The Monster Museum - that is really worth it's weight in gold - adorned with life-sized mock ups of Michael Jackson's were cat from his Thriller video, an Alien, a Predator and one of the best mock-ups of the Creature from the Black Lagoon I've ever come into contact with - remember what I mentioned about the Universal Monsters earlier? Take note of the photograph below! - my son Mike and I were just gawking....and, oddly enough, we completely forgot to buy anything in the midst of all that picture taking. Go figure!

I said this on HAUNTCAST, I'll repeat it here - don't even think about bringing a young kid into this - no one below age ten, and, quite frankly, that's pushing it from my perspective - this thing is dark, gory and intense to huge degree - I saw quite a few adults flipping out that night and I shudder to think what it would do to a little kid.

The Darkness is part of a website network called Scarefest (www.scarefest.com) and they also have their own as well (www.thedarkness.com), although the Scarefest site seems to be the primary place for information and background material.

As you can probably imagine, this place has received a literal ton of media attention, a lot of it available on YouTube - for a nifty behind the scenes look, check out the user "McKamey Manor" for some really interesting pieces...also worthy of note is the America Haunts series, (www.americahaunts.com)  who did a very revealing piece on the site and it's creators...this, too, is floating around on YouTube and is well worth a look....

A point worth mentioning: I discussed atmosphere earlier - a great example of blowing the atmosphere was in a haunt we saw last year, set up in a recently defunct shopping complex, more than likely one that housed a K-Mart, WalMart or something of that ilk...anyway, as we traveled through their "labyrinthine paths" - hey, it was in their promo, not mine! - all you had to do look was look up and see the sprinkler systems...not to mention the walls were a bit on the short side, and you could see the plate glass windows of the entrance...yeah....needless to say, that blew it right there...another pet peeve of mine...

A little trivia - do *I* get scared anymore by haunted houses?

Truth be told, no, not really...I can be startled - I think no one gets past that - by genuinely scared? Nah. I'm far past that point. I go to see this for the artistic aspect and showmanship - dazzle me, thrill me - all that sort of thing - I want to be amazed y'know? Show me what ya' got!
In that regard, The Darkness pays off in spades - you just cannot afford to miss this one!

Next time around, we'll be heading to Akron, Ohio to visit the Haunted School and Lab - it's been up and running for over thirty years and is one of the best the Buckeye state - not to mention the country! - has to offer and another of the "must see" variety!

Until then, Stay Scary! 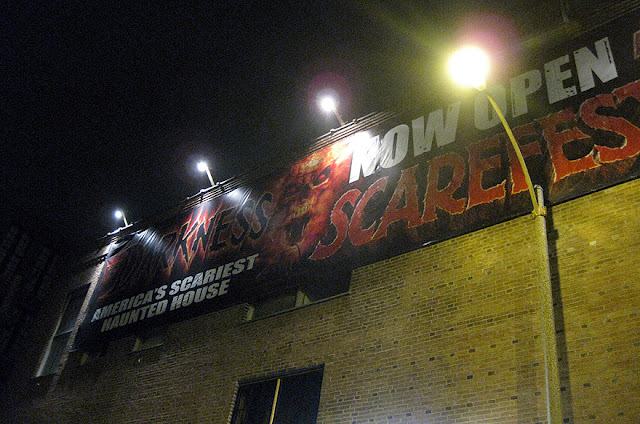 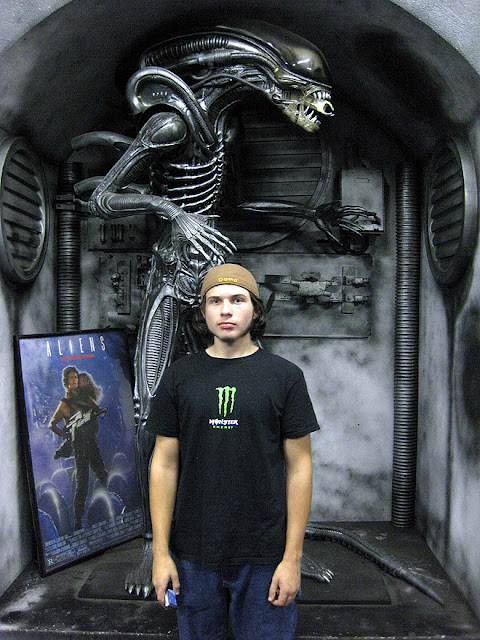 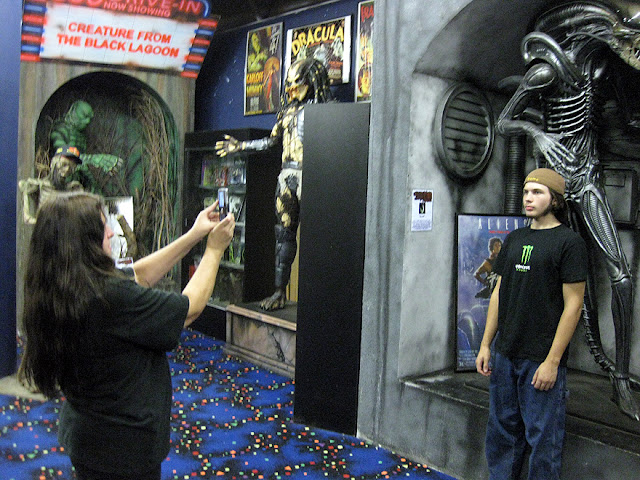 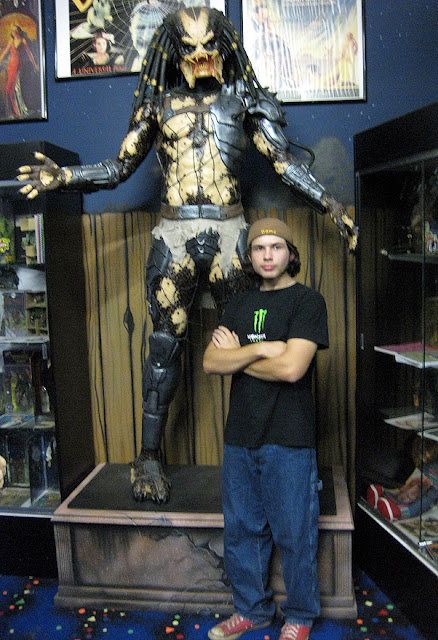 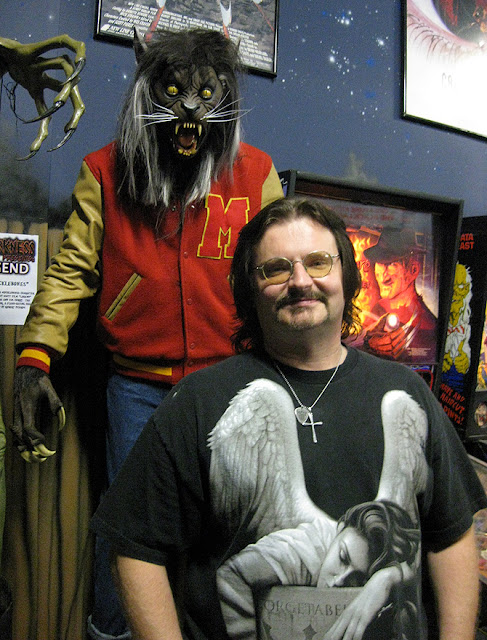 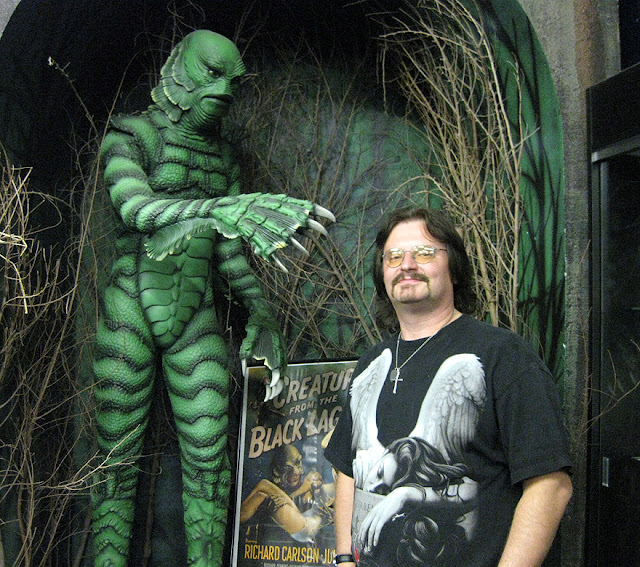