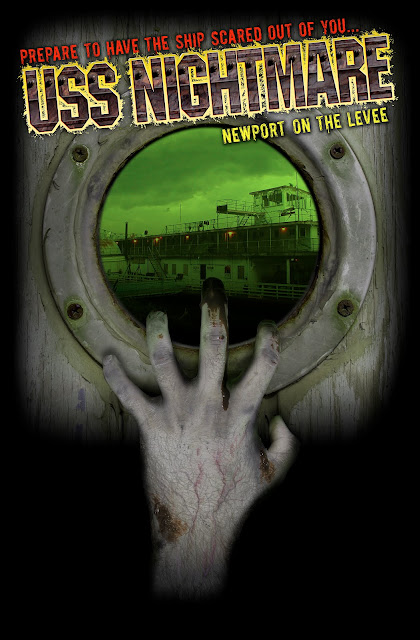 The USS Nightmare will always hold a special place in my heart - located out of Newport, KY, directly across the Ohio River by Cincinnati - this was the first truly major haunt my wife and I ever visited - most prior to this were of the farmer's field/haunted hayride/small property owner variety - not that there is anything wrong with them, we've been fortunate to see a few in this category that really understood how to make the most of what they had, and do it extremely well - but the Nightmare just took things to another level for us.

In and of itself, the concept of the haunted steamboat is quite popular - do a quick Google search and you'll see what I mean - however, there is something quite unique here...the ship has a genuine early-American falling-into-decay feel, which really intensifies the ghost ship vibe... take a good look at it in the dusk and evening hours - speaks for itself.

I've always felt the wait in the ticket line should be part of the experience, sort of a tension builder - that, and chatting with the various like-minded folk, but that's another matter - and if this doesn't help build up a convincing atmosphere, nine times out of ten, neither will the main event.

(....ever been to a haunt and the exterior is not much more than some hastily assembled plywood walls or used to be a K-Mart...? Kind of kills the suspension of disbelief, doesn't it?...by the way, I'm establishing some criteria here for future reviews, so pay attention, gentle reader!)

Another aspect that I love about the haunt is the layout, design and sets - I grew up in the '70s/'80s - yes, I'm *that* old! - where atmosphere and inspired acting was king.

The Nightmare is spectacularly designed - a haunted house/ghost ship that ebbs and flows almost with a life of it's own - you're drawn through crypts, tombs and various ports of call, never quite knowing what - or whom - you're going to bump into...all the while, it's not overwhelming you with technological tricks and treats - and while there are a few, it's not to the point of overkill.

The set pieces are fantastically crafted and quite realistic, and the tactical lighting produces a sinister, swirling, gothic atmosphere.

The beauty of it all is the consistency of the flow - there are no "switching themes" right in the middle of the action or dropping some creature or prop completely out of character with everything else - while mixed themes can work to fantastic effect - I'm not knocking them - that would not work here, and I think Those Who Are Behind the Scenes know this.
All of this leads up to the actors, who are truly some of the best in the business, and they make the haunt - they all have fleshed out characters and all I can add is BEWARE THE CAPTAIN!

The haunt runs about half an hour - give or take - and there are lots of twists and turns, not to mention stairs, and those with a fear of heights may want to consider carefully - there's a few spots that will make your head spin!

From a personal standpoint, we've been to the Nightmare three times - in '06, '07 and '11 - all three were delightful experiences with '07 being the most memorable as we we're fortunate to meet the owner, who, when we had mentioned that it was my son's birthday - which it was - offered us all a second run through free of charge as a present to him - you don't see that every day!

As far as intensity goes, I would not recommend this one for really young or sensitive kids - while not excessively gory, the realism and intensity to the Nightmare may upset the younger set. I wouldn't bring *any* child under ten to this one...that is, unless you're a mean-spirited creep and want a ton of psychiatric and dry cleaning bills from the trauma you've put your kid through!

There's an unspoken rule of thumb among haunt lovers: if your kid can't handle it, for pity's sake, DON'T BRING THEM! You won't toughen the child up by doing this, and, quite frankly, you look like a sadistic asshole to the rest of us, plus, you're pissing us off by wrecking our evening with the child's terrified screams....a little common sense goes a long way here...

As do most major haunts nowadays, the Nightmare offers a photo op at the top of the attraction - what sets them apart from a lot of the competition is their rather slick choice of backgrounds.....at the bottom of this post you'll find my favorite shot from our 2006 visit...we've had our pics done with each visit, but there's nothing like the first time, is there?

Check out their home page at:
www.ussnightmare.com
for all the back story, desktop wallpapers and all the insider info you could want.

Next time around, we'll take a look at The Darkness in St. Louis, MO, considered by many as one of the top five haunted attractions in the country.

'Til next time, stay scary! 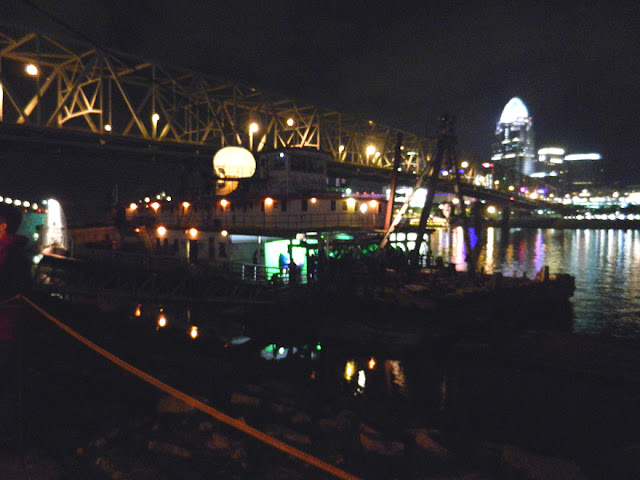 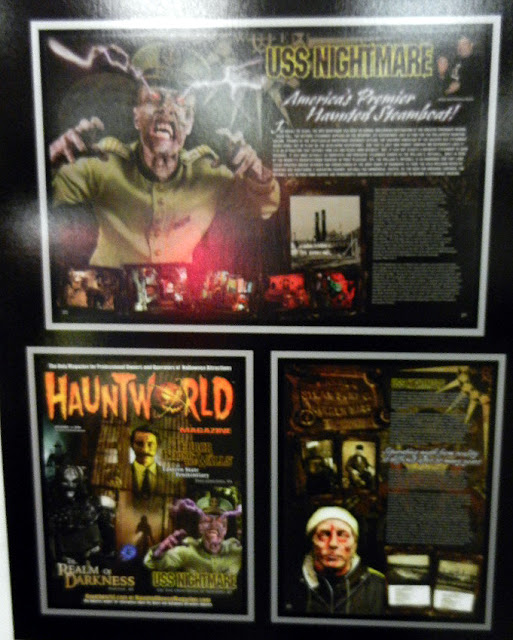 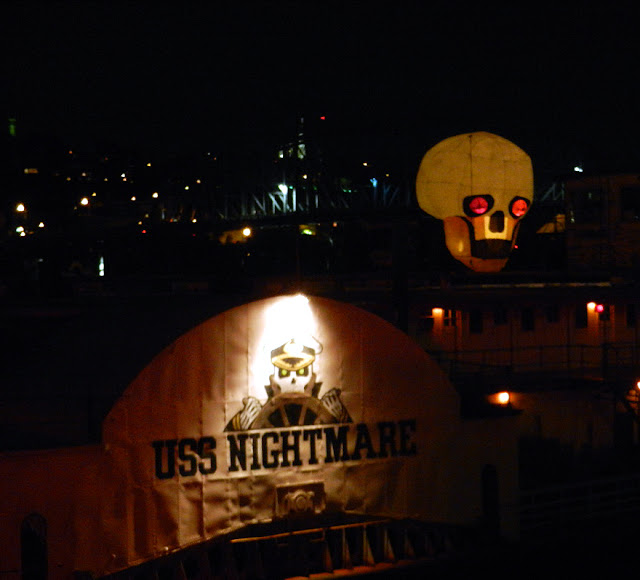 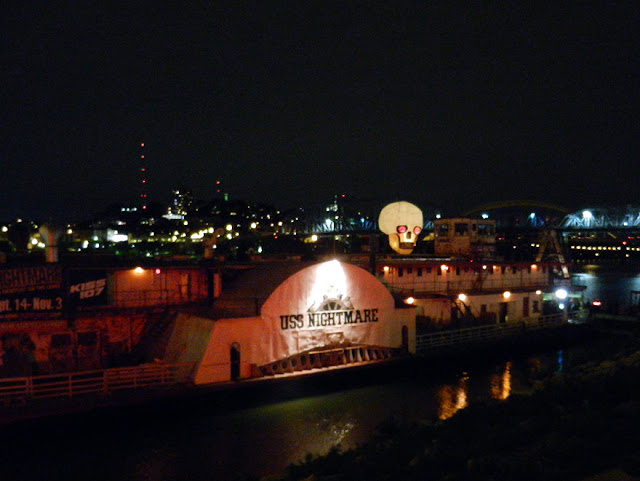 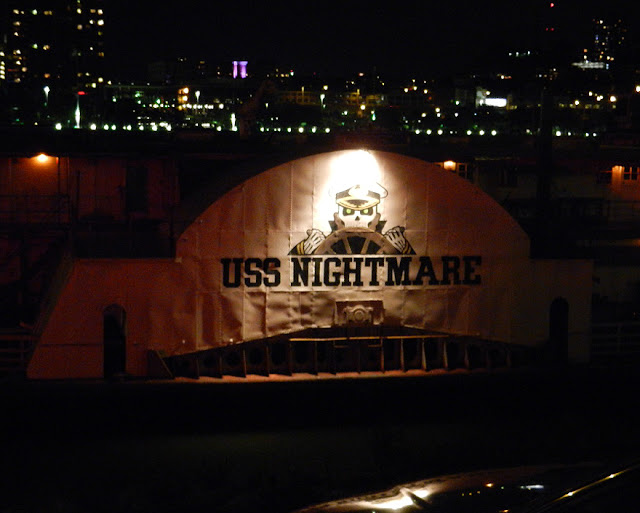 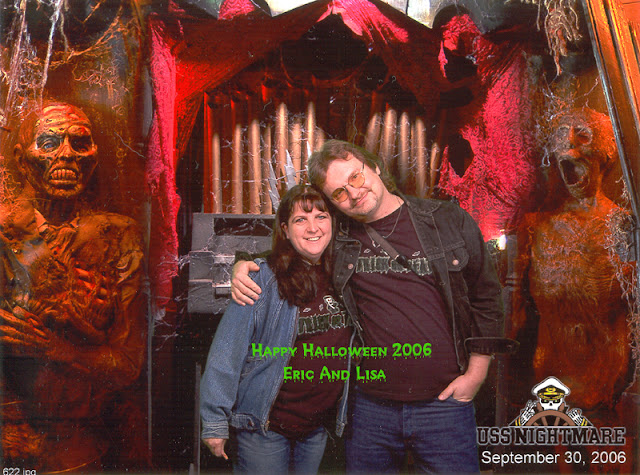 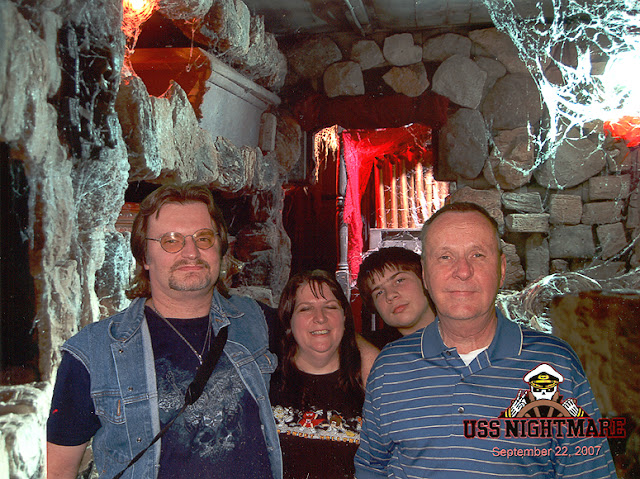 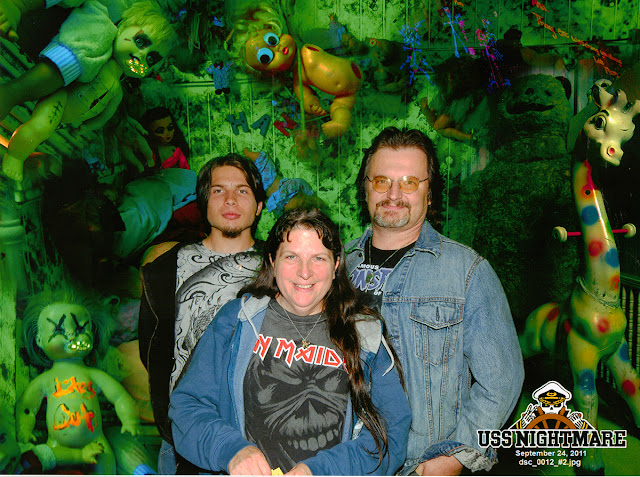 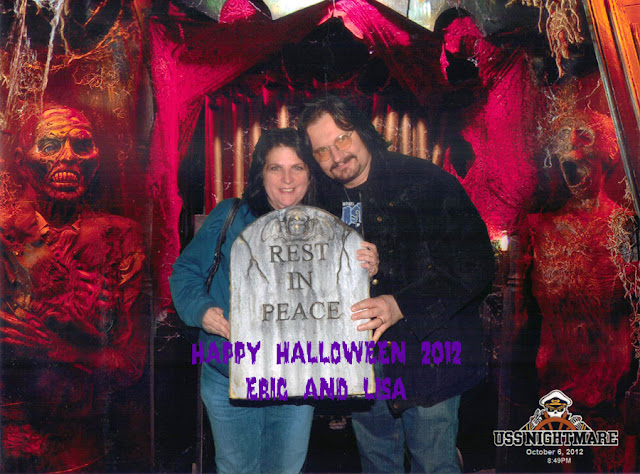